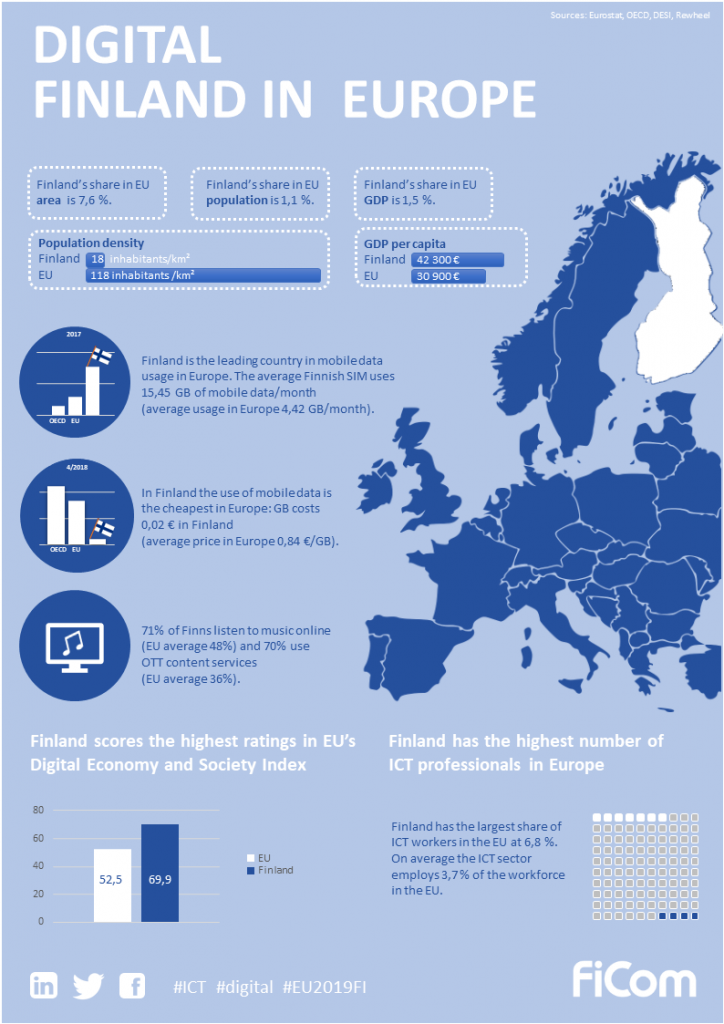 Finland is a large country that, according to European standards, is very sparsely populated: there are only about 17 people per square kilometre. A Greek meets his friends in a tavern. A Finn picks up his mobile phone. Information networks cover the entire country of 340,000 square kilometres.

Finland is one of world’s leading countries in information and communications technology. Many of the things that are regarded as typically Finnish have contributed to Finland’s digital success story: the spirit of enterprise, which could at times even be called stubbornness the telecommunications market, which was opened up for free competition very early on the solid, democratic welfare society.

Besides, Finns, who have always been fascinated by novelties, have received all new gadgets with open arms and thereby formed an excellent test public for new devices.

Links to latest news on Finnish ICT and information society:

Finland is often being called world’s telecommunications test laboratory. This is because of the advanced nature of the Finnish telecommunications market. Many services and technologies have been introduced in Finland much earlier than in other countries. Many international companies use Finland as a test laboratory for experimental launches of new products and services.

An essential feature that differentiates Finland from most other countries is that the national Post and Telecommunications never enjoyed a state monopoly. Regional, private companies have been responsible for providing basic services in many parts of the country. During the years 1980 to 1987 these regional “monopolies” were abolished as a result of deregulation, and markets opened for free competition. (Source: Ministry of Transport and Communications Finland)

You will find both Finnish and international up-to-date ICT statistics at section ICT-ala – Tietopankki (statistics are in Finnish language only).

Links to latest news on Finnish ICT and information society: